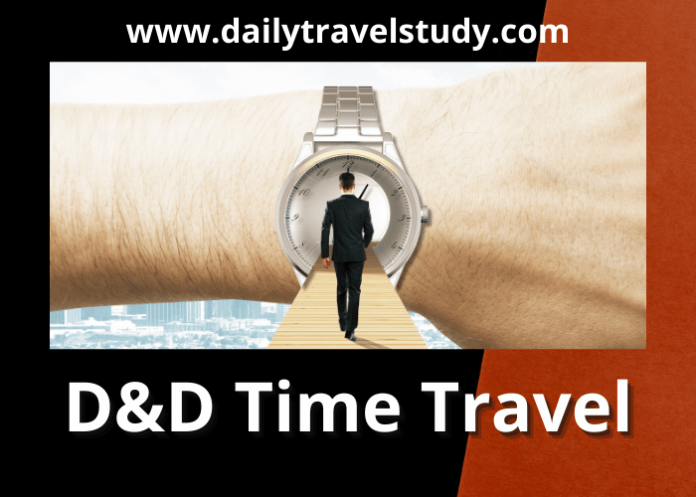 D&D Time Travel allows an individual, group, or entire city to travel backwards through time in order to experience the previous year, decades, or even centuries ago. They could visit an ancient civilization they had only a small knowledge of, or see their home in years past. This was a difficult and risky feat.

D&D Time Travel was quite different from seeing into the future or predicting it, which was a magical power granted by a school of divination.

D&D Time Travel was tightly controlled by the Realm deities. Mystryl, an ancient goddess of magic and time, prohibited any being from altering the “stream of the time” in the ages prior to and up until the fall of Netheril. The law was generally valid, except for one way that Mystryl chose, which was the time conduit. She was also omniscient to any anomalous event that tried to circumvent her law.

The goddess’ successors, Oghma, Deneir and the two incarnations Mystra, continued to limit D&D Time Travel for at least the next 17 years. Mystra gave certain powers to her seven daughters, the Seven Sisters, and a few of her Chosen, and other great spellcasters to enable them to monitor Faerun’s chronomancers and prevent them changing or creating new timelines. It is not known what, if any, role Chronos, Orvan gods of time, played in this role.

Many Sages believed that altering a critical or decisive event could change the “stream of history” and allow for the creation of a new timeline. This could be significantly different than the one they know. Some people believed that it was impossible to travel from one timeline into another, even for the gods. They couldn’t perceive such divergent realities. If you are looking to inject some life into an old campaign that has been stagnant or is in decline, why not try putting the PCs back in the past? Some of you may be scowling at this idea. But in a world full of magic, is D&D Time Travel that unlikely?

When they aren’t challenged, players get bored. You can throw bigger monsters at them, but that becomes boring. My experience has shown me that any challenge that forces them to step outside of their comfort zones is good for the game. The success of their characters depends on what is familiar. High-ranking Habit Travel PCs have a reputation, and the community is familiar with their actions. You might be able no have a bigger impact on them than you think.